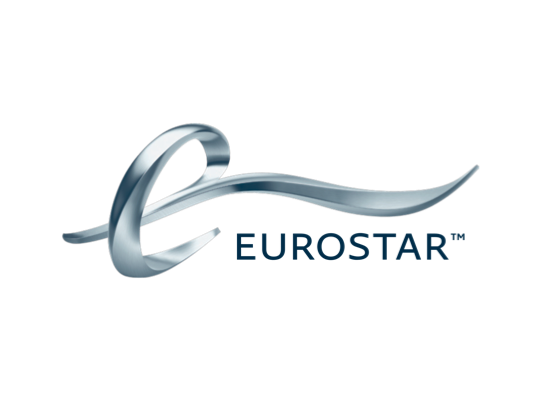 If you're after Eurostar train tickets, look no further. At TrainPal, we'll show you where Eurostar can take you and how to book the best value fares for your journey. To find Eurostar tickets, simply start a search above, and we'll show you the best available journey times and prices. Keep reading for more information on classes, onboard amenities, destinations, and cheap train ticket tips.

Eurostar is a high-speed rail service linking London St Pancras station (renamed 14 November 2007) in the UK with north Paris, Lille, France and Brussels, Belgium (south). The train leaves London and crosses the English Channel to France. Eurostar trains in Belgium and France use the same track as TGV and Thalys in France, and a new section of track in the UK that meets TGV standards. Major stations: London St. Pancras, Kent, Paris (France), Brussels (Belgium), Disneyland France, etc. Since the first official Eurostar train entered service in November 1994, it has become the most popular train on the London-Paris rail route. In November 2004, Eurostar usage accounted for 68% of the London-Paris route and 63% of the London-Brussels route. Prior to 14 November 2007, it took 2 hours 35 minutes from London to Paris and 2 hours 20 minutes from London to Brussels. The second stage of the Channel Tunnel Link was completed in 2007 and opened in November of the same year, the Eurostar is a 300 km/h ultrafast train, the time from London to Paris and Brussels was reduced to 2 hours 15 minutes and 1 hour 51 minutes respectively. Completion of the second phase of the project has not only increased the speed of travel, but also significantly increased the frequency of services to London. London and mainland Europe will increase by at least eight trains per hour in both directions.

Unsure about where to start your Eurostar adventure? Use our map to plan out where you want to go. From London, you can enjoy high-speed services to destinations like Liverpool, Edinburgh and Manchester. Eurostar are one of the primary rail operators in the UK, providing services from London Euston and a number of major terminals including Birmingham New Street, Manchester Piccadilly and Liverpool Lime Street. Many of the routes feature high-speed services with no changes required, making Eurostar an excellent alternative to air travel if you're looking to traverse up or down the length of the country.

What can Eurostar offers

Traveling with Eurostar is comfortable, easy and simple, with no excess baggage issues or liquid restrictions. Arrive at your destination in style and comfort, then stretch out in your spacious seat and enjoy the scenery.

How to Get Cheap Eurostar tickets

Looking for cheap train tickets on Eurostar routes? We've got you covered! Check out the suggestions below and discover tips you can use to save on your next train journey.

Travelling with Eurostar a few times a year? Get a Railcard and you'll save up to 1/3 on eligible journeys. Click on one of the Railcard types below to see the various eligibility requirements.

Q:
1. How fast is the speed of Eurostar?
A:
The maximum speed of the Eurostar is 300 km/h (186 mph) and 160 km/h (100 mph) in the tunnel. Passengers can take the Eurostar from London's Waterloo station to Paris' Gare du Nord in 2 hours and 35 minutes, and to Brussels' central station in 2 hours and 20 minutes.
Q:
2. How much luggage can I bring?
A:
There is no weight limit for luggage on Eurostar, but you need to be able to carry and lift your luggage safely yourself as there is no porter service at the station and unfortunately our team cannot carry your luggage. Each bag must be up to 85 cm long at its widest point and clearly labeled. There are no liquid restrictions, so bring your favorite toiletries and Parisian perfume. Alcohol has some restrictions.